The Stavanger Botanic Garden was established in 1977 and includes 8 hectares of garden and parkland. The botanic garden is owned and operated by the City of Stavanger. 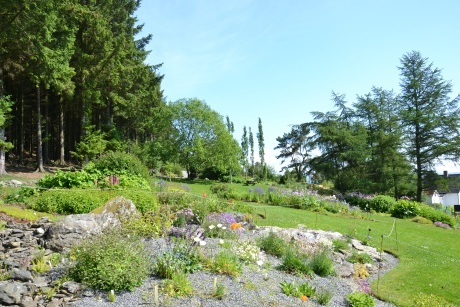 Stavanger botanic garden is located between the university campus and Ullandhaug tower. Follow the signs labelled “Botanisk hage” from the main road at Ullandhaugveien or Kristine Bonnevies vei.

Stavanger botanic garden is always open to the public.

There is no admission charge.

In the Geographic Garden you can see species from other parts of the world where the climate is similar to that of the Stavanger area. Among the highlights are the big-leaved species of Rhododendron (e.g. R. sinogrande) and kiwi (Actinidia deliciosa) from Asia, several species of Hebe from New Zealand, Embothrium, Eucryphia, and Nothofagus from South America.

The Herb Garden contains a variety of medicinal and poisonous plants, culinary herbs, plants used for dying and plants used for tea. You will also find a selection of traditional and modern vegetables.

The Perennial Garden contains herbaceous and mixed borders with species of interest to gardeners particularly in south-western Norway.

Did you find what you were looking for?

Thank you for letting us know!

We will not reply, but your feedback helps us make this site better!

We are terribly sorry

Sorry, that is too much feedback

We limit the number of times one IP address can submit feedback within a given time frame. You have reached that limit.